started a topic almost 2 years ago

So I know that selecting different scales and such is on the roadmap, I just wanted to give my feedback as per a possible implementation.

To me it seems quite un-optimized to have entirely different presets (see "Orba" and "Orba diatonic") even though only the tuning of the sound changes. Since I've had to customize my presets in order to have diatonic Leads and 7th chords available with all patches, my sound selection in the app has become quite crowded.

I feel like it should be possible to select these kinds of parameters from the preset page, I've made two quick mockups of how I think this might work:

This would be the chord preset selection, allowing for 7th, normal chords and Open modes: 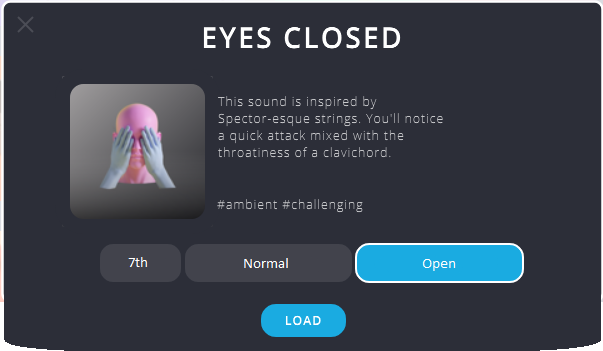 This would be the Lead selection, allowing for pentatonic and diatonic scales: 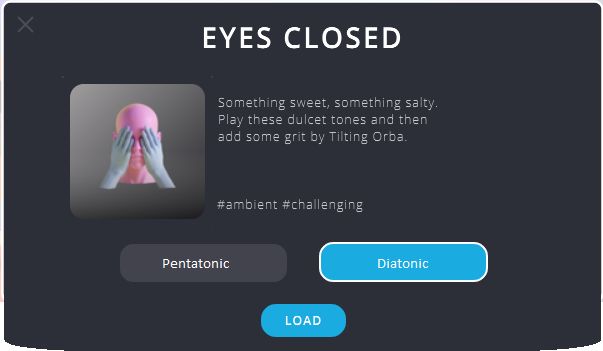 I would hope for this to be expanded upon even more, with possibilities to enable/disable different gestures for the sounds, such as having the "Vibrato Bass" as an option, rather than it's own preset

Hi @ Quad Plex. Thanks for putting this together. This is really interesting, and I'll make sure this gets shown to our development team.

What would be some other scales and chords you'd want to see available for Orba?

Hey @Evan, thanks for the quick feedback!

The most obvious scale I'd love to see implemented aswell is a simple blues-scale, which would be a lot of fun to improvise with on a Lead voice. Apart from that there's the standard list of classical scales such as Iorian, Dorian, Phrygian and the likes, however they're probably less priority to have on-board the device.

As far as chords are concerned I would already be content with the given selection if the 7th and Open variants were available to be selected for all chord patches by default, as per my original suggestion. However, someone with more knowledge of musical theory than I do might want to see some more complex chord arrangements added, I can't say much more about that

Actually, I did notice another scale that I feel would be a nice addition, a harmonic and a melodic minor scale opposed to the only currently available natural minor scale would allow for more expressive lead-playing aswell

@Evan: related to this https://artiphon.freshdesk.com/support/discussions/topics/44001015321

This is a must have as it would increase dramatically the expressivity of the instrument.

I add that I could be nice to switch between scale on Orba directly, but of course this opens up a broader discussion on clever shortcuts. Maybe A + instrument + slide?

I like the User Experience proposed here.. and the feature itself (chords/scale selection) seems a must to me!

I'm a "recent arrival" and for WIW I agree that  selection of scale should be independent of the voice. If we could then have the major and minor blues scales as well as major, harmonic and melodic minor it would be fantastic!

Even if this was only available from an external interface (the app or MIDI) that would be fine for my particular needs.

I agree that basic Blues scale seems to be an obvious one. I would add Harmonic Minor. Technically Melodic Minor is different ascending vs. descending so that doesn't really make sense for the Orba. I would also like to see support for other "meditative" scales like those played on steel slit tongue drums (handpans, tank drums, hang drums, etc.) - scales like "Integral", Pygmy, Akebono, etc. There are a few that are very popular for that and they are not modes of the major scale.

Adding to this, I'd really love to see Phrygian Dominant so I can play Jewish music (and, as a bonus, more metal) with the Orba :)

Artiphon has no plans to add this functionality as far as we know, but one of the forum members has created a utility which allows you to program the Orba with any chord or scale.

It would be useful to get some feedback on it, and the instructions, so post here if you get stuck. It's easy once you get the hang of it. :-)

(Actually, Phrygian dominant sounds cool. I'll have a go at adding this to the presets and post a demo.)

So…Phrygian dominant on the Orba. Here’s a brain dump of everything I know about this question.

A lot of people are confused about modes. I’ll attempt my own explanation. If there are any music theorists on the forum, I expect they’ll shout me down.

Firstly, what’s the difference between a scale and a mode? One difference is that a “C” scale always starts on the note C. if it’s C Minor, or C Major, or C Phrygian Dominant, it starts on a C note.

A “mode” is more about the relationship of the notes rather than the ‘absolute value’ of them. A Major scale has two semitones between the first two notes. A Phrygian scale has one.

Where do these modes come from anyway? I think it’s easier to grasp if you’re familiar with a keyboard. If you play eight white notes on a piano starting on C, you get a certain series of semitone/tone steps between each note. If you start on a D, you get a different one. The “mode” is the sequence of semitone/tone steps. Eg for a major scale, that’s 2212221; two semitones from the first note to the second note, two more from the second note to the third one, etc. If you Google “2212221 major” you’ll get loads of results; it’s a standard way of representing the relationship between the notes in the sequence.

The standard modes, Dorian, Phrygian, Lydian, Mixolydian, etc., represent the series of semitone/tone steps you get when starting on successive notes on a keyboard and just playing the white notes. Start on D, you get the Dorian sequence. Start on E, you get the Phrygian sequence. Etc.

If I’d never played a keyboard and only ever played, eg, a flute, these would seem strange and arbitrary. In general, guitarists seem to find it harder to “get” modes than pianists, and I can see why.

This gets more complicated. The standard modes only have semitone and tone steps to worry about, but “Phrygian Dominant” introduces another twist, which is that the third note is sharp; it’s like Phrygian but adding an extra semitone to the count for the third note. You could represent Phrygian as 1222122, where the first number “1” is the semitone between the first note and the second one, the second number “2” is the tone between the second note and the third one. But Phrygian Dominant messes with this by putting in a three-semitone jump after the second note. After than it gets back on track by only having a semitone jump to the next note, so the rest of the mode sounds the same. It’s represented as: 1312122.

The modes all have their own sound. Phrygian dominant is a sound that features in metal music. It’s been called “The Metal Scale”. That tag will confuse guitarists even more, because it’s not a scale; it’s a mode. It should be called: “The Metal Mode”. If you were to say, “Let’s do a track with Phrygian Dominant in G”…now, that’s a scale.

Get on with it. I want to play Orba Metal.

The reason for this backstory is that the way to customise scales on the Orba, created by @Subskybox, is by messing with the ones that Artiphon provided…Major and Minor.

Get this into your head. Under normal circumstances, the Orba can play two scales. Major and Minor. (Natural minor, to be precise.)

The only way to play alternative scales is to redefine these. So for instance, if we want to play Phrygian Dominant on the Orba, we can say: “Never mind Minor. I was Phrygian Dominant instead. Let’s swap it out.”

(Alternatively, you could swap out the Major scale instead; it doesn’t matter. You can have two scales, only two scales, and they can be whatever you want. But in this case the Minor scale seems a better fit. No-one ever had a Doom Metal hit in a Major scale.)

How to swap scales

@Subskybox is a programmer. He uses websites like Github. But that’s OK, we can work with that.

There are three levels, based on the combat rankings in Elite.

1) Mostly Harmless. You can load the attached Song preset “Frigging Dominant”, copy it to your Orba lead presets folder (C:\Users\

ata\Roaming\Artiphon\Orba\Presets\Lead on Windows), load it, and go. Just remember to put your Orba in “Minor” mode, because this preset swaps out Minor for Phrygian Dominant.

2) Competent. You can use the “Chord Fiddler” program to choose from a preset range of scales. These presets don’t currently include Phrygian Dominant, but it could be added at some point.

3) Deadly. You can edit the file that defines the scale presets, which is called “orba-scales.json”, and works by defining offsets to the two basic presets in the Orba App; Major and Minor. To get going with this one, I chose the "Phrygian" entry for the Minor scale, then changed the offsets to sharpen the third note.

I’ve attached the preset (based on “Minimax”) and a quick MP3 demo. It would be great to get the documentation at Github to the point where people felt confident to start implementing their own scales, so feel free to post any further questions about custom scales and chords here.

Awesome, thanks for the preset example and the entry point for editing the presets! Phrygian dominant is also an extremely common mode for Jewish, Arabic, Spanish, and Romani music (so it shits me when people refer to it as a "dark" or "evil" scale form).

For me, even the Western natural minor sounds weird, so being able to use a harmonic minor (which is equivalent except for the root position to a Phrygian dominant anyway) feels much more natural :)

2 people like this
Login or Signup to post a comment
Topic merged into this topic:
More topics in Orba
See all 242 topics
Help Desk Software by Freshdesk Support Desk